Sen. Joe Manchin (D-W.Va.) said late Wednesday that an expansion of Medicaid that Democrats are seeking to pass as part of their massive reconciliation bill must include the Hyde Amendment to get his support."Yeah, we're not taking the Hyde Amendment off. Hyde's going to be on," Manchin told National Review when asked about a proposed Medicaid-like program in the reconciliation bill."It has to be. It has to be. That's dead on arrival if that's...

Sen. Joe Manchin (D-W.Va.) said late Wednesday that an expansion of Medicaid that Democrats are seeking to pass as part of their massive reconciliation bill must include the Hyde Amendment to get his support.

"Yeah, we're not taking the Hyde Amendment off. Hyde's going to be on," Manchin told National Review when asked about a proposed Medicaid-like program in the reconciliation bill.

"It has to be. It has to be. That's dead on arrival if that's gone," Manchin, who has described himself as "pro-life, and proud of it," added.

Under the Hyde Amendment, Medicaid and other federal programs are prohibited from covering abortion expenses. Government spending bills have included the stipulation since 1976.

Some Democrats are pushing to include a Medicaid-like program in the reconciliation package in which the federal government would step in and provide coverage in the 12 GOP-led states that have so far declined to expand Medicaid under the Affordable Care Act.

The Democrats' proposal does not include language reflecting the Hyde Amendment.

Democrats are trying to move a massive spending package that could include the Medicaid language through a process known as budget reconciliation, which prevents it from being filibustered. This means they could move the package through the Senate with no GOP votes, but they cannot afford a single Democratic defection.

Bills have been routinely passed with Hyde Amendment language for years, but doing so has grown much more controversial among Democrats, and the new debate would come as many Democrats worry over access to abortion rights given state laws limiting the practice.

President Biden had backed the Hyde Amendment for decades, but reversed his position ahead of the 2020 presidential election under pressure from progressives, who have long said the law discriminates against minorities. His budget did not include Hyde language.

Manchin is a critical vote on the budget reconciliation package, and has called for the measure to be reduced from the $3.5 trillion size favored by liberals.

On Wednesday, Manchin did say he could support the passage of a reconciliation package with Democratic priorities before the end of 2021.

"I think we can get a good bill done. I really do, and work in good faith," Manchin said.

The Hill has reached out to Manchin's office for comment.

Looks like more trouble for the Democrats attempting to pass Biden's agenda.

Will they actually be able to pass either bill?

Between this and the squad's bullshit, who knows LOL

Juan Williams just said "It's always darkest before the dawn."

It was music to my ears.

What's going to be funny will be listening to Democrats spin it if they fail to pass both bills.

I wonder how they will blame Republicans for a lack of support for their own bill?

That's the amazing part of it. They could walk away with nothing!

I think all this demand does is really just create a shell game. The Hyde Amendment says you cannot use federal monies to pay for abortion but it does nothing from states taking money from their budget to fund abortion and then using the federal money to cover the shortfall based on what they took out. It's just an accounting trick and the amendment is really for political concerns rather than doing anything.  But hey, they can stand up for those who hate abortion and talk about how they prevented federal tax dollars from being used.

While I don't like abortion I don't believe I am wise enough to know what is best for other people. So I am in favor of any woman for getting as many abortions as she can afford. And if states choose to use their tax dollars to fund abortion there's not much I can do to stop them. If my states does it all I can do is vote against the current administration of my state.  I would rather tax dollars not go to abortion but I'm not going to stop what the people want, if they continue to re-elect people who support spending state tax dollars for abortion services then the people of that state have spoken.

The Hyde Amendment has been included in spending bills for over 40 years now.

Why do Democrats want to change it all now?

While true that states can pull it off, at least voters in that state will have a chance to vote on those people supporting such actions.

I 100% agree with you in that a woman should have all the abortions she wants and can afford.

I would rather tax dollars not go to abortion but I'm not going to stop what the people want, if they continue to re-elect people who support spending state tax dollars for abortion services then the people of that state have spoken.

I would rather my tax dollars weren't spent funding drones that often indiscriminately kill fully grown innocent adults as well as children. But we don't really get the choice to pick and choose where our individual tax dollars go. I also think that those who sell religion shouldn't be tax exempt making everyone else's tax burden larger, but again, we don't really get to make that choice. I'd much rather have the $7 billion the Catholic Church has spent paying off victims of their priests sexual abuse go to paying property and income taxes, but I don't get to make that choice. People who are all butthurt over the possible Hyde amendment repeal need to get the fuck over it.

I disagree with Manchin on this

I respect that, but if it meant passage of a major part of both bills, I have no issue with the Hyde "Amendment". 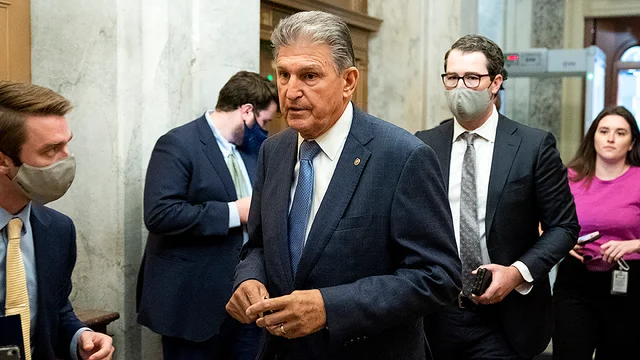 How on earth is Nancy and Chuckie going to slash $2 TRILLION from their bill AND maintain support of the Squad?

Ain't going to happen as far as I can see, unless the Squad caves totally.

It will be fun watching Nancy squirm.  This is the story of the day. The left is hiding from it. They had another confab. They decided to post a lot of nonsense about Trump.

I can't blame them. This month has been a bitter pill for democrats.