Trump asked if the visiting leader's name was like "Fook You," according to Ted Osius, the former U.S. ambassador to Vietnam.

When Trump was told the visiting leader's name rhymed with book, Osius said the then-president asked if it was like "Fook You."

"I knew a guy named Fook You. Really. I rented him a restaurant," Trump continued, according to Osius' account. "When he picked up the phone, he answered 'Fook You.' His business went badly. People didn't like that. He lost the restaurant."

"All those present laughed dutifully," Osius wrote in "Nothing Is Impossible: America's Reconciliation With Vietnam." Salon published excerpts on Tuesday ahead of the book's release later this week.

Phuc is now the president of Vietnam.

Osius resigned as ambassador five months after the meeting, protesting a Trump White House proposal to deport more Vietnamese refugees who had lived in the United States for decades.

Trump has a long history of making sexist, racist and otherwise offensive comments.

During Trump's time in office, he described Haiti and African nations as "shithole" countries and was blamed for a spike in anti-Asian racism during the coronavirus pandemic. Trump still uses racist slurs to refer to the virus.

i dont accept criticism of biden from people who support trump

I too admire Trump's classy followers. 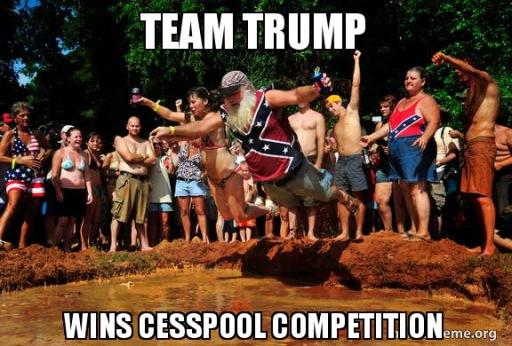 Maybe one day the left will concentrate on what the human fuck up machine they inserted into the WH is doing?

"Trump still uses racist slurs to refer to the virus."

So do some posters here.

The virus that originated in Wuhan, China....perhaps?

Yeah that one. Not sure how calling it the China virus is racist that being the case but for some it's just another "but Trump" thing. 24/7/365 he lives in some people's heads.

Thread removed for no value. [ph]

It is racist to refer to Co-Vid as the China Virus or Kung flu like whatshisname and his supporters do.

It escaped from the virus lab in Wuhan, China

My grandfather, a Vietnam veteran, hooked up with a Viet girl a few years after the war.

He told me the story of how they met at a bar, and how he took her home that night, and how he began having PTSD flashbacks as soon as she undressed.

"It was just like the war," he said. "I couldn't see the Vietnamese in all the bush."

Has anyone ever seen Donald Trump laugh at something that was genuinely funny without being disparaging of some person or demographic?  The guy is a mentally ill psychopath who is devoid of a healthy sense of humor.

I think it's funny that people can get so worked up over what someone else said in private, as if they have never said anything wrong themselves while they thought they were in a "safe" place or surrounded by "safe" people.  Does the book say he told the joke in front of the then-Vietnamese Prime Minister?  This doesn't read as if he did,  so he said it while in a closed room where he was being prepped for the meeting.  I think people would be astounded and disgusted with what their hero's say behind closed doors.  Just about everybody has said things they shouldn't have.

2. Trump is a piece of shit human being.

3. Conservatives have been in denial about #2 for years and years.