Denis Villeneuve's adaptation of Frank Herbert's novel is undeniably staggering. But his Dune also feels rudimentary, as if he's managed his source material without fully mastering it.

Sci-Fi epic 'Dune' is an immersive but incomplete experience 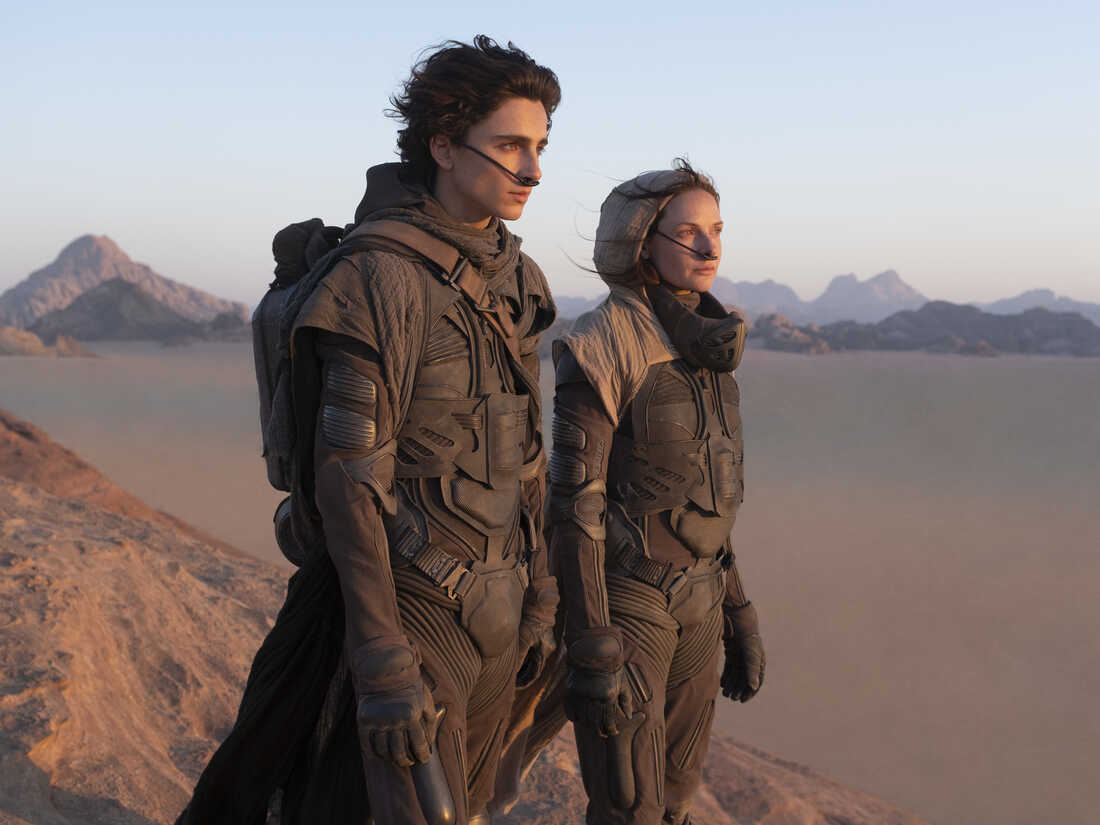 Timothee Chalamet is a royal heir, and Rebecca Ferguson is his mother in Dune . Chiabella James/Warner Bros. Pictures

Dune may not be the best new movie you'll see this year, but it's easily the most new movie you'll see this year. I left the theater feeling overwhelmed and a little parched, as though I'd spent two hours and 35 minutes being pummeled by hot desert winds and blinding sandstorms. The world of Frank Herbert's novel feels big and immersive here in a way it never has on-screen, with its futuristic spacecraft, cavernous fortresses and, of course, terrifying sand worms.

I've never been a huge fan of Denis Villeneuve's technically stupendous but oddly soulless movies, like Prisoners and Incendies , or bought into the notion that he's some kind of second coming of Stanley Kubrick. Still, there's no question that he's well prepared for this assignment as the director of moodily ambitious science fiction like Arrival , probably his best film, and Blade Runner 2049 .

With Dune , Villeneuve and his co-writers, Jon Spaihts and Eric Roth, have made a lucid adaptation of a book that's long been deemed unfilmable: The Chilean filmmaker Alejandro Jodorowsky famously abandoned his Dune movie in the '70s, and David Lynch's 1984 version was deemed such a disaster that Lynch himself disowned it. There was also a bland 2000 miniseries that at least understood that the book might be too dense to squeeze into a single film.

That may be why Villeneuve opted to split Dune into two movies. This first installment is a largely faithful retelling of a complicated story. Many millennia into the future, the universe has become a vast feudal society — a sort of interstellar Game of Thrones — in which noble houses control different planets. The most coveted is the desert planet Arrakis, or Dune, the source of a powerful, life-extending substance called spice.

As the story opens, there's been an imperial decree that control of Arrakis will be taken away from the treacherous House Harkonnen and handed over to its longtime rival, House Atreides. It's a triumph for the good Duke Leto Atreides (Oscar Isaac), though he and his advisers, played by actors including Jason Momoa and Josh Brolin, suspect they may be walking into a trap.

Timothee Chalamet is a great choice for the duke's son Paul, a coddled royal heir who could be the "Kwisatz Haderach" — that's Dune- speak for messiah figure or superbeing. For the most part, the movie keeps Herbert's made-up languages to a minimum.

Villeneuve wants even novices to be able to follow along. He plays up the book's ever-resonant subtexts of colonial oppression and ecological disaster. And he's cast even the smaller roles with magnetic actors, like Charlotte Rampling and Stellan Skarsgard, who keep you watching even when the plot begins to tilt into abstraction. Rebecca Ferguson brings a welcome warmth to Lady Jessica, Paul's mother, with whom he flees into the desert when House Atreides comes under attack. And Zendaya and Javier Bardem turn up among the Fremen, the brutally oppressed Indigenous people of Arrakis, who will play a larger role in part two.

For sheer seat-rattling spectacle, Dune is undeniably staggering. The attack on House Atreides is staged with a brooding, quasi-Shakespearean grandeur. And then there are those giant sand worms winding their way through the story, so mysterious and mesmerizing to behold that you almost wouldn't mind being eaten by one, just to see what it's like.

But there's also something crucial missing . Much of the plot is advanced through elements of mind reading and mind control, so it's a shame that the movie never really gets inside its characters' heads. As with so many of Villeneuve's films, the visuals are stunning but the storytelling feels rudimentary; you get the sense that he's managed his source material without fully mastering it. In some ways, Lynch's Dune actually got closer to the mind-bending strangeness of Herbert's novel; it had a touch of visionary madness that this movie could use a little more of.

Even though Villeneuve's Dune is incomplete by design, there's something odd and unsatisfying about the point at which it slams to a halt. Still, it duly whets your appetite for part two, assuming it gets made; that will depend on whether part one does well enough at the box office. I hope Villeneuve gets the chance to finish what he started. This first Dune may not be a great movie — or even half a great movie — but Dune the planet is gorgeous enough that I wouldn't mind a return visit.

I watched this movie on Friday evening at home via HBOMax. I have a decent surround system and 4K UHD television so it was pretty immersive. It's a huge expansive movie that should probably be watched in a theater. Box office takes are estimated to be $40M domestic and over $200M worldwide.

Part 2 has been green lit and will most likely start filming next year for a 2023 release.

I need to pickup the first 3 books and read them again. I don't think I got through the 3rd one back in HS when I read them the first time. They are pretty dense and there is a lot of political intrigue going on.

I read the first two Dune novels many years ago, and really enjoyed them.

Haven't seen the movie, and though I'm sure I will, I'm not necessarily in any kind of hurry.  I also have a feeling this movie is going to be a little bit of a box office disappointment.

It had been thought for many years that The Lords Of The Rings trilogy by Tolkein could not be successfully translated to film , but along came Peter Jackson and made what many consider to be the best fantasy films ever made.

People also wonder how Dune  , a very dense and complicated story filled with terms and other worldly concepts that in my opinion dont translate easily into mainstream acceptance. "Spice" , sandworms, secret quasi -religious societies, etc.  , not really themes people are that familiar with in traditional fantasy.  I think people could go into LOTR without ever having read the books and pick up most of the elements of the story fairly easily, but I'm not at all sure that the same will hold true for Dune. This may be one where you will need to have read the book.

Professor Guide
2.1  seeder  evilgenius  replied to  JohnRussell @2    one month ago

I also have a feeling this movie is going to be a little bit of a box office disappointment.

It's already made money world wide so not really a disappointment even though it went day and date with HBOMax here in the US. I've not heard any streaming numbers, but the box office numbers (COVID taken into context) are very good.

Professor Guide
2.2  seeder  evilgenius  replied to  JohnRussell @2    one month ago

Professor Principal
3  JBB    one month ago

That said, it is a new and visually stunning remake.

Why it wasn't marketed that way seems like dishonesty...

I knew it was only part 1 at least a year ago, but then again I'm on a bunch of nerd movie sites. LOL.

Not sure where you’re getting that idea. I’m pretty sure the official title of the movie has always been “Dune: Part One” and that also appears in the title screen at the very beginning of the movie.

I couldn't tell if the reviewer liked it or not. I am going to say they did yet it is not any masterpiece.

Professor Guide
4.1  seeder  evilgenius  replied to  Ender @4    one month ago

I couldn't tell if the reviewer liked it or not.

As with all Villeneuve's movies, it was visually stunning, but otherwise really good - just not really great.

Probably read the trilogy in HS, they are still in an unpacked box of paperbacks in the garage.

The David Lynch 1984 movie with Sting as Feyd Rautha and Sir Patrick Stewart as Gurney Halleck? That movie was so bad David Lynch disowned it. LOL. The Syfy Dune miniseries in 2000 was much better, but not awesome. I have it on disc somewhere that I got in a box of movies from an ex coworker.

Sophomore Principal
6  Hallux    one month ago

Never liked the book and copious quantities of psilocybin did not help. Perhaps Villeneuve will develop the fortitude to tackle something far less faddish such as Michael Moorecock's 'The Dancers at the End of Time'.

Professor Guide
6.1  seeder  evilgenius  replied to  Hallux @6    one month ago

There was talk a few years ago about an Elric series, but with GoT and The Witcher it pretty much seems to have been shut down as an option. The BBC as optioned The History of the Rune Staff. We'll see where that goes. I'd love to see someone option The War Hound and the World's Pain.

Professor Expert
7  Tacos!    one month ago

I think it’s really good. They have made some changes and omissions from the source material, but such things are inevitable in any adaptation, and they are minor.