‘SUCK ON THIS’: Steve Bannon Tells Audience, ‘We’re Taking Over All the Elections’

‘SUCK ON THIS’: Steve Bannon Tells Audience, ‘We’re Taking Over All the Elections’

Moments before news broke that   Steve Bannon   was being   indicted   by a federal grand jury on Friday, he was putting forth his master plan for national domination.

The former adviser to   Donald Trump   told his viewers on   War Room   that the Trumpified GOP “is taking over all the elections.”

Bannon has baselessly claimed on numerous occasions that the 2020 presidential election was stolen from Trump.

He then hailed the election of Republican   Glenn Youngkin   as governor of Virginia, and suggested he only won because Democrats were prevented from stealing the content.

“Suck on this,” said Bannon, doing his best   Thomas Friedman   impression . “Ninety-five percent of the billets in Virginia were occupied of election officials and poll watchers, and that is a principal reason that we secured the election of Youngkin, ok?”

Watch above via Real America’s Voice.

The post   ‘SUCK ON THIS’: Steve Bannon Tells Audience, ‘We’re Taking Over All the Elections’   first appeared on   Mediaite .

We’d love your feedback on Immersive Reader. Did content appear properly on this webpage?

Bannon and his repulsive ilk have declared war on America. Who will pay attention ?

Bannon should suck on ''it'' himself.

He will when he gets a cell mate.

LOL  Thanks for the laugh.

LOL.  You just did it again for me on the Rittenhouse judge article.

I will be here all week.  Be sure to tip your waitress.

LOL. And you, too, imitate Chaucer in "A Knight's Tale".   Nobody tips in China, and tips are not even expected.  When I first arrived here I didn't know that, tipped the taxi driver and he almost kissed my feet.

good ole Steve should be Bannonished to another country, say Russia perhaps, and maybe all his duped flock of fumbling bumbling  N  B leavin bozo boneheads along with him, cause i don't know about many how can they, still  believe in such a complexly simple deceive...

Okay, 'pig man' is making his case for private domination and white male control over the diversification of 'America.' So, democrats flex their local, state, and federal 'pecs' and 'wash-board abs.'

“Remember, there are no whining and no tears in the War Room .

"War Room." There it is! Admission. Democrats, Independents, - some conservatives (Trump conservatives) are politically WARRING WITH THE REST OF THE POL SPHERE. Time to wake up and smell the Coffee!

Some conservatives are stealing your stuff; by hook or by crook. they are trying to make wimps out of their opponents!

WHAT YOU DOING ABOUT IT? 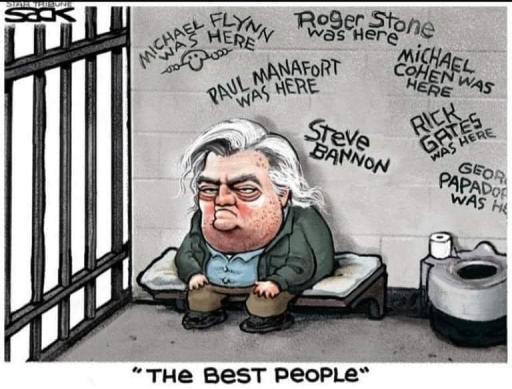 The talking heads say, Bannon is not going to jail, he will post bail (from his 'friends with deep pockets') and then drag stuff out until 2022 and the 'hopeful victory' of his congressional friends who will squash (request DOJ drop) the proceedings from the House.

More proof of white privilege ("outlawism") as a thing in this country. Only white males can come up with this shit and get away with it. If only because they bitch and moan when others attempt to do so! Moreover, it's not because they're smarter than anybody else (they are not). It is because some conservatives don't follow the rules, policies, laws that they impose on minorities, women, LGBTQ, Native Americans, immigrants, or non-conservative peoples of faith.

When will idiots wise up and throw these assholes in the trash pile.

Jackasses need to open their eyes and realize people like him and not doing it to help them. He could care less about the people he is aiming this shit at.

Also, (interjection!) wanna make a bet he would be saying it was rigged had the guy lost.

Instead he is using it as an excuse for them to take over polling places.

None of our NT conservatives have come to his defence.  I can understand why - I sure as hell wouldn't want to be tarnished by being on his side.

Professor Principal
8  Buzz of the Orient    3 weeks ago

Although I don't believe in being cruel to animals, IMO Bannon should be sent to Gitmo and given the FULL treatment they used there to force information out of terrorists until he produces the information that he has - everything short of killing him.