Rather, Cooper wanted to emphasize that when Christians celebrate Thanksgiving, they do it in the context of God's benevolence and favor toward the United States. "History is complex, right? And we don't want to impugn motives to them just because we look back and say, 'Yeah they really shouldn't have done a b c and d," he said.

I admit this is not what I usually seed. But this article is so over the top it sounded more like The Onion than anything else.

The bolding of sentences in the article was done by me. 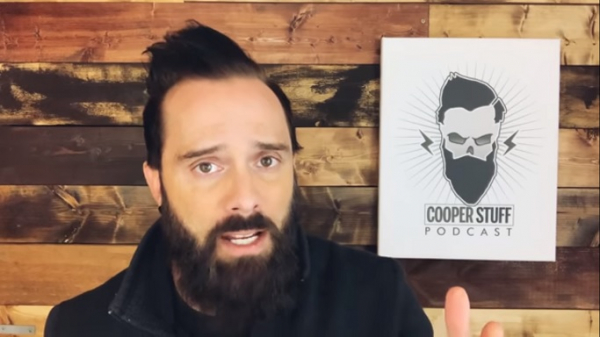 With Native Americans and Anglo-Americans on the verge of a racial war over the history of Thanksgiving, Skillet's frontman decided to record a podcast in support of Christians.

On November 29, Skillet's lead singer John Cooper confronts the accusations of racism, prejudice, and colonialism against Thanksgiving in the   latest e pisode  of the Cooper Stuff podcast.


Cooper cited a   tweet  from Black Lives Matter that reads, "You are eating eating dry Turkey and overcooked stuffing on stolen land."

Other tweets reflected the same thoughts. Without dismissing the injustice meted out to Native Americans, Cooper sought to bring clarity on the many perspectives on history.

His concern is with progressives using Native Americans' struggle to denigrate the Christian foundations of early European settlers in America.


"We have to remember that Jesus Christ is Lord over history," he said.

Despite the hullabaloo surrounding the history of Thanksgiving, his premise is as follows:

"Number one, history is not a god and therefore it is not determinate on your future.   Number two, in studying the past, we should distinguish between event history narrative history and steer clear from ideological history that's a big problem.  Number three, adherence to God's design will lift all people up that's going to be for in the future."

Adherence to God's design is the key

Cooper admitted that America had committed several atrocities in the past. He said, however, that such a horrific history must be seen in light of humanity's desperate need for a Savior.

Nevertheless, Cooper saw the erroneous belief that man may be perfected in today's humanistic society, where social justice movements and even Christians are participating.


"They don't believe that men on and women are born in sin. They believe that we are born good, and we make choices and we actually can reach salvation on our own," he said.

As for the social justice warriors, he said they would still accuse white Americans of ignoring America's real history, despite America's previous good deeds and the attempts of godly leaders to correct historical injustices.

For Cooper, this has to be addressed head-on since most people don't realize that Christians and those in the social justice movement were not discussing the same history. That's not to say that this is a denial or an effort to rewrite the past.

Rather, Cooper wanted to emphasize that when Christians celebrate Thanksgiving, they do it in the context of God's benevolence and favor toward the United States.


"History is complex, right? And we don't want to impugn motives to them just because we look back and say, 'Yeah they really shouldn't have done a b c and d," he said.

By virtue of fairness, Cooper argues it is unreasonable to embrace the ideology that claims every aspect of American life stems from racial colonialism, in which white Americans impose their version of reality on the new territory. That's not what Christians, like the Mayflower settlers, are thinking about when they speak about Thanksgiving.

"That's not what they mean," he said.

It's the narrative that you're not learning....What is the gift that America gave to the world? ...in writing this is so wonderful, 'That all men are created equal.'"

As for those who accused him of neglecting the atrocities perpetrated against Native Americans throughout history, his response is:

I guess the premise of this nonsense is that no matter what atrocities were committed in the past Jesus is in charge of the future.

Wait, wasnt Jesus in charge of the past too ?

"We have to remember that Jesus Christ is Lord over history," he said.

This isn't the compliment to Jesus that he obviously meant it to be.

So, do you as a Christian blame Jesus for every sin every society committed on the earth?  Is that your understanding of sin?

It is a ridiculous explanation.

Clearly “progressive” Christianity is not Biblical.  My group? Which would that be?

My group? Which would that be?

He seems that his God is only responsible for a whitewashed US history of 250 plus years, the other millions of years is the responsibility of some other ''God.''

The "atrocities" of the past were part of Gods plan to bless America , evidently.

There was no United States of America prior to July 4, 1776.

There was no United States of America prior to July 4, 1776.

And what does that have to do with my comment, perhaps God can't count or you can't handle the truth. Your choice.

God can count just fine and I can handle the truth just fine.  Anything that happened in the Western Hemisphere prior to July 4, 1776 is upon Portugal, Spain, Holland, France, the UK and the indigenous then here.

What a totally ignorant comment. So on July 4th, 1776 all of the people that lived in the yet-to-be-formed US disappeared and totally new perfect people were placed here by God...LMAO that is so fricking stupid not even a moron would state something like that.

So prior to July 4th, 1776 the Founding Fathers didn't exist, history has to be rewritten.

Anything that happened in the Western Hemisphere prior to July 4, 1776 is upon Portugal, Spain, Holland, France, the UK and the indigenous then here.

What's so hilarious is this is almost the same exact excuse I've heard from white Southern conservatives who try and reject any responsibility for slavery, segregation, Jim Crow laws and their opposition to the civil rights act because they and their descendants changed party affiliation in the following decades.

The revolutionaries in 1776 came from and were made up of those same (mostly) British, but also some French, Portuguese, Dutch and Spanish who's families had immigrated here over the previous century. The only difference after 1776 was that they had won their freedom through a heavy cost of blood and betrayal. The revolutionaries used the threat from the British of them turning slaves into British militia in return for their freedom to garner the slave owners cooperation. They constitutionally legalized slavery for the next 80 years.

Everything has an origin and ignoring the facts and trying to pretend that the revolutionaries didn't exist prior to 1776 or that the white Southern conservative Christian Democrats magically disappeared and created some fantasy void that Southern conservative Christian Republicans came in and filled is laughable. The deep desperation of those who come after to create some sterling fantasy version of their ancestors and thus themselves is truly sad. It's the deepest form of denial and borders on clinical delusions.

Some desire so strongly to live within their fantasy creation that they simply can't accept the truth and thus reject any facts and history that tells a more factual history, they are dead set on supporting the idea that the winners should get to write the history, and they think white conservative Christians should be the winners and thus are the ones who should be allowed to rewrite the facts to make themselves the heroes of every story. Anything less would be an admission that they're not the 'winners' which their fragile little ego's simply can't accept.

Well according to certain folks (off topic, sorry John) all crime only occurs in blue cities/states.

Isn't it true that Native Americans warred against each other and committed atrocities long before White people arrived?

The seeded article does not suggest that God favored Native Americans, quite to the contrary

By virtue of fairness, Cooper argues it is unreasonable to embrace the ideology that claims every aspect of American life stems from racial colonialism, in which white Americans impose their version of reality on the new territory.

That's not what Christians, like the Mayflower settlers, are thinking about when they speak about Thanksgiving.

"That's not what they mean," he said.

He is saying that the Mayflower settlers version is the TRUE version because it is THEIR version and God favors them.

The puritans back then would probably have stoned him, thrown him overboard on the way over here or burned him at the stake.

Much of pre-Columbian history was written by Columbians many of whom burned the texts of those pre-Columbians who had a written language. Christians loved burning anything that did not equate with their 'man'ifest destiny.

The Spanish burned thousands of codices of the Maya, only 5 have survived to this day.

It was also true that the English have been fighting the Scotts and the Irish since the Romans left the islands.

Did you have a point?

Isn't it true that Native Americans warred against each other and committed atrocities long before White people arrived?

This is like arguing that there would have been nothing wrong with rounding up all the surviving Germans after WWII and putting them in gas chambers or using them for human experiments because they did it first. Just because some tribes warred with other tribes, killed each other and even took some prisoners of war as slaves doesn't mean we should justify the white conservative Christians who came here and attempted to wipe out native Americans so they could take their land and fought a war to maintain their perceived right to keep treating humans as cattle.