ADL chief says ex-president’s comments are ‘antisemitic, plain and simple’; AJC: ‘His past support for Israel doesn’t give him license to traffic in radioactive antisemitic tropes’

“Insinuating that Israel or the Jews control Congress or the media is antisemitic, plain and simple,” Jonathan Greenblatt, the chief executive of the Anti-Defamation League, wrote on Twitter Friday.

Trump’s  comments  from an interview in July with Israeli journalist Barak Ravid, were broadcast Thursday on the Unholy Podcast, hosted by Yonit Levi of Israel’s Channel 12 news and Jonathan Freedland of The Guardian.

In his remarks, the former US president returned to his frequently made accusations that American Jews are ungrateful for all he has done for Israel. “There are people in this country that are Jewish — no longer love Israel. I’ll tell you, the evangelical Christians love Israel more than Jews in this country,” Trump said.

“It used to be that Israel had absolute power over Congress. And today, I think it’s the exact opposite. And I think Obama and Biden did that,” Trump continued.

The American Jewish Committee tweeted Friday that Trump’s “past support for Israel doesn’t give him license to traffic in radioactive antisemitic tropes — or peddle unfounded conclusions about the unbreakable ties that bind American Jews to Israel. Enough!”

Jewish Democratic Council for America CEO Halie Soifer tweeted that “what [Trump] doesn’t understand is that American Jews despise him — and all he stands for in the GOP [The Republican Party] — because he’s a depraved bigot who continues to attack our democracy & his policies are antithetical our values. This has nothing to do with Israel.”

Trump spoke to Ravid for the reporter’s new Hebrew-language book, “Trump’s Peace,” about the Abraham Accords last year, the normalization deals between Israel and the United Arab Emirates, followed by Bahrain, Sudan, and Morroco, brokered with the help of the Trump administration.

In previous broadcast excerpts from the two taped interviews Ravid conducted with Trump, the former president savaged ex-prime minister Benjamin Netanyahu for congratulating Joe Biden on winning the presidency last November — “I haven’t spoken to him since. Fuck him,” Trump  said  — and  said  Netanyahu never wanted to make peace.

Trump has a record of making incendiary comments about US Jews and Israel. He has previously made  similar remarks  to those revealed in the recordings, drawing criticism for insinuating that American Jews should base their political decisions solely on the Israel issue. Speaking to US Jews, he has also  referred to Israel  as “your country.”

While many US Jews are generally supportive of Israel, they have consistently rejected accusations of dual loyalty toward the Jewish state, typically seen as an antisemitic canard.

Trump has also drawn rebuke for saying that Jews who  vote Democrat  are “disloyal.”

Over the past decade, Jewish voters have shown stability in their partisanship, according to data from Pew Research Center. Jewish voters identify with or lean toward the Democratic Party over the Republican Party by a roughly 2:1 ratio.

“It’s sad that once again we have to restate this point, but the vast majority of American Jews support and have some type of connection to Israel, regardless of which political candidate they vote for,” Greenblatt said.

Jews make up only a small portion of the national electorate, but in places like Florida, they can represent a crucial piece of the swing state electoral puzzle. Historically, American Jews have voted heavily Democratic.

No national exit polls on the  Jewish vote  were published after the 2020 election. A poll commissioned by the Republican Jewish Coalition found that 30.5 percent of Jewish voters voted for the Republican incumbent Donald Trump nationally, compared to 60.6% for the Democratic challenger Joe Biden.

Meanwhile, a poll commissioned by the liberal group J Street found that 77% of Jewish Americans voted for Biden and only 21% for Trump.

The sole reason evangelicals like Israel is that their fave party, Armageddon, will happen in Megiddo. It will be a BYOBiblical happening.

evangelical chicken, convert or else...

Exactly, they NEED the Jews to bring about the end of the world. The jews won't be there when all is said and done.

And to think people want him to run again...

Professor Principal
2.1  Krishna  replied to  Ender @2    one month ago

And to think people want him to run again...

Total morons the MAGA people are!

(Although I suppose there's one thing we have to be grateful for-- thank goodness there aren't of those idiots here on NT!!!

His past support for Israel

Doesn't mean a goddamn thing. If Trump could publicly support Israel while quietly exterminating Jews and illegals he would.

His past support for Israel

BTW, that's a common misconception. Trump does not support Israel-- and never did.

Rather what he and his evil cohorts have done is to support the most extremist elements in Israeli politics.

Professor Principal
4  Krishna    one month ago

Aw c'mon...let's not pull any punches! The fact is...not only do the Jews control the media-- they also control Hollywood. (Just look at look at Mel Brooks...& Jon Stewart to name just two of so many!).

And the Jews control international banking...look at the Warren Buffet family, the Bill Gates family, the Jeff Bezos family...to say nothing of the YUGE Rothschild family...to name just a few!

And many Americans are saying that the Jews were behind the 9/11 attacks-- which brutally murdered thousands of Americans in cold blood! 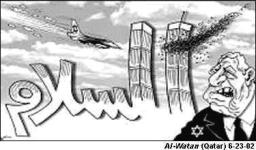 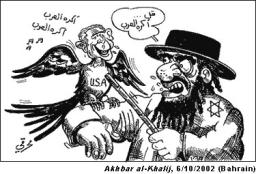 Junior Principal
5  Gsquared    one month ago

Trump is sick and perverted.  He is also succeeding in driving even more Jews out of the Republican Party.

Professor Principal
6  Kavika     one month ago