Russia's victory in Mariupol a turning point for war in Ukraine, experts say

"This is old-age siege warfare now, where he's going to hold them off and try to starve them out and wait for them to come out with their hands up," Fraser said. "It is going to be absolute misery for the rest of the fighters. A lot of uncertainty of what's going to happen next."

BUZZ NOTE:  A news broadcast video is an integral part of this article and can be accessed by clicking on the "SEEDED CONTENT" link just below this message, which will take you to the original source article.  You may have to bear a 15 second commercial before the news starts.

Russia's victory in Mariupol a turning point for war in Ukraine, experts say 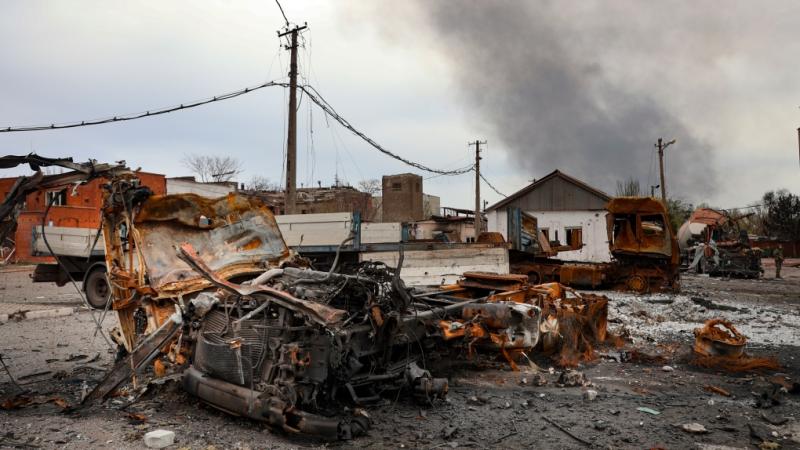 Burned vehicles are seen at the destroyed part of the Illich Iron & Steel Metallurgical Plant, as smoke rises from the Metallurgical Combine Asovstal during heavy fighting, in an area controlled by Russian-backed separatist forces in Mariupol, Ukraine, Monday, April 18, 2022 (AP Photo/Alexei Alexandrov)

"For Russia, this would be the first major city that they have taken after 50 plus days of hard fighting," retired Maj.-Gen. David Fraser, a former commander of NATO forces in southern Afghanistan, told CTV's Your Morning on Thursday.

Russia has hoped to carve out a land bridge between itself and Crimea, the southeastern Ukrainian peninsula that was annexed by Russia in 2014. Fraser calls Mariupol "an important place for the Russians because it's the last piece of the puzzle they need for the land bridge between Crimea and Russia."

The last Ukrainian forces in the city are holding out inside of a steel plant. Putin has told his forces to seal off the plant "so that not even a fly comes through."

"This is old-age siege warfare now, where he's going to hold them off and try to starve them out and wait for them to come out with their hands up," Fraser said. "It is going to be absolute misery for the rest of the fighters. A lot of uncertainty of what's going to happen next."

Experts say Russia's military success in Mariupol is a significant asset to Putin's propaganda efforts at home. In an intelligence update, the  U.K.'s Ministry of Defence  reported that Russia "likely desires to demonstrate significant success" ahead of May 9, recognized as "Victory Day" in Russia to commemorate the surrender of Nazi Germany in 1945.

"Putin is trying to show some victories and progress of what otherwise has been a disaster as a war effort," Fraser said. "It gives him some relief so he can now focus back on the Donbass area and to show the rest of Russia that he's going to win under his belt."

Aurel Braun, a professor of political science and international relations at the University of Toronto, says the brutality of the Russian aggression has seen a surge ever since Putin appointed notorious Gen. Aleksandr Dvornikov to lead the invasion of Ukraine.

"Gen. Dvornikov has a reputation for committing atrocities in Syria. He was known as the Butcher of Syria, but he's much more methodical," Braun told CTV News Channel on Thursday.

"He is willing to starve people out. The Russians have not only engaged in aggression, but they have committed continuous atrocities. And this is what we see in areas that have been liberated by the Ukrainian forces," he added.

Now the attention turns to Donbas, the eastern Ukrainian region that had already been partially occupied by pro-Russia separatist forces since 2015. Russian officials for weeks have said capturing the whole of Donbas is the main goal of the war.

"The Russians, under a unified command now, are attacking across 480 kilometres (in Donbas) There's finding out where the weaknesses are in the Ukrainian defences," Fraser said.

The escalating conflict in the Donbas is prompting the U.S., Canada and other allies to send even more military aid.  U.S. President Joe Biden announced  on Thursday that his administration would be sending a US$800 million military package that includes in heavy artillery, 144,000 rounds of ammunition and drones.

Prime Minister Justin Trudeau also mentioned at a news conference on Wednesday that  Canada would be sending heavy artillery to Ukraine  after a request from Ukrainian President Volodymyr Zelenskyy, but was tight-lipped on any details regarding cost or the specific equipment.

If Putin is successful at taking Donbas, Braun believes he may send Russian forces back to northern Ukraine to try and regain positions there. But if the Ukrainians in the region are able to defeat the Russians, Bruans says the Russian leader " may be facing problems that he has never faced in his 22 years of rule."

"The military and the security services may begin to question his policies. They will understand at that stage, that he has led them to disaster," he said. "That will be a huge blow to his prestige and to his credibility.

With files from The Associated Press and CTVNews.ca's Rachel Aiello.

Judging from what Biden is doing these days, next year's "American Billionaire's List" might have a lot of additions from the armament manufacturing industry.

Junior Principal
2  Gsquared    one month ago

The grotesque, genocidal Russian dictatorship needs to be de-Nazified.