BORDEAUX, France (AP) — The landscape in the prestigious vineyards of Bordeaux looks the same as ever, with healthy, ripe grapes hanging heavy off rows of green vines. But this year something is starkly different in one of France's most celebrated wine regions and other parts of Europe.

BORDEAUX, France (AP) — The landscape in the prestigious vineyards of Bordeaux looks the same as ever, with healthy, ripe grapes hanging heavy off rows of green vines.

But this year something is starkly different in one of France's most celebrated wine regions and other parts of Europe. The harvest that once started in mid-September is now happening earlier than ever — in mid-August — as a result of severe drought and the wine industry's adaptation to the unpredictable effects of climate change.

Paradoxically, the season of heat waves and wildfires produced excellent grapes, despite lower yields. But achieving such a harvest required creative changes in growing techniques, including pruning vines in a different way and sometimes watering them in places where irrigation is usually banned. And producers across Europe who have seen first-hand the effects of global warming are worried about what more is to come.

So far, "global warming is very positive. We have better ripeness, better balance. ... But if you turn to the future, and if you increase the temperature by one degree more, plus, you will lose the freshness part in the balance of the wine," said Fabien Teitgen, technical director of Chateau Smith-Haut-Lafitte, an estate that grows organic wine grapes in Martillac, south of Bordeaux.

Grape growers adjusted their practices amid a series of heat waves, combined with lack of rain, that hit most of Europe. In the Bordeaux region, in southwestern France, giant wildfires destroyed large areas of pine forests. It did not rain from the end of June until mid-August.

As the harvest unfolds, dozens of workers kneel in the vineyards to hand-pick grapes and put them into baskets. The fruit is immediately crushed to make juice, which is put into tanks, then barrels to start the wine production process.

The harvest aims to produce the white wine from the famous Pessac-Leognan appellation. Red wine will soon follow.

Eric Perrin, one of the owners of the Chateau Carbonnieux estate, recalled that during his childhood, in the 1970s, harvests started around mid-September. This year, they began on Aug. 16.

But the 2022 vintage may be better than ever, Perrin said, because the grapes are healthy and well balanced. The hot, dry weather also prevented vines from getting diseases such as mildew.

Producing wine is a centuries-old tradition at Chateau Carbonnieux, where Thomas Jefferson visited the vineyards in 1787, before becoming president of the United States, and planted a pecan tree that still stands in a park.

Before, vintners used to give vines a shape that allowed grapes to get the maximum amount of sun so they produced more sugar, which converts into alcohol. This year, growers tended to let leaves protect the grapes so the shadows would preserve the fruit's acidity and freshness, Teitgen explained.

Yields may be 15% to 20% lower in the broader region, mostly due to smaller grapes and the fact that some were burned by the sun in specific areas, Teitgen said, but it won't affect the wine's quality.

In front of the 14th-century tower of the Chateau Smith-Haut-Lafitte vineyard, Manon Lecouffe this week carefully watered newly planted vines, an indispensable job.

Vines that are several years old have deep roots that allow them to draw water from far underground and endure drought without suffering too much.

But this year, estates had authorization to water adult vines, a practice usually banned in Bordeaux.

"Some plots were heavily suffering with leaves falling," Lecouffe said.

Another step vintners may take is to reduce the density of their plots to require less water or to work the soil to better conserve moisture deep down.

Experts are also considering whether planting new grape varieties could be helpful.

At Chateau Olivier, which also produces Pessac-Leognan wines, Director Laurent Lebrun showed how he and his team go through the vineyards to taste grapes plot by plot to decide where and when to harvest.

The consequences of global warming are now part of daily life for vintners, Lebrun said, noting the speed of the changes.

"We need to reprogram our own way of thinking," he said. "There are many tools that are still within our reach, which are already used in warmer regions."

Further south in Europe, harvests also started weeks earlier than normal to save shriveling and scorched grapes. Production is expected to be 10% to 20% lower in some regions of Italy, Spain and Portugal, though producers are hopeful of increased quality.

Italy's Coldiretti agricultural lobby stressed that the higher cost of energy and raw materials is expected to increase costs by 35%.

As warmer winters cause grape vines to produce early buds, French vintners worry that frost will disrupt the growing season more often. Violent hailstorms can destroy a year of work in a few minutes.

At Chateau Carbonnieux, Perrin fears some smaller producers may not withstand the changes.

"Climatic events since 2017 have led to smaller harvests. Not everyone will be able to survive it, for sure," he said.

Follow all AP stories on climate change at https://apnews.com/hub/climate-and-environment.

Professor Principal
1  Buzz of the Orient    one month ago

I watched a program that indicated that a region that is not particularly known for its wines and has generally had lower grape yields because of usually greater rainfall than France is Belgium, and this year, because of the changes in the weather, Belgium will have a bumper crop as compared to France where the yield will be less.

A month or so ago 60 Minutes did a great story on this and how grapes that a decade or so ago were not grown in the UK have become, due to climate change, a booming area for wines now.

Professor Principal
2.1  Buzz of the Orient  replied to  Kavika @2    one month ago

The Niagara peninsula area of Canada has provided prize winning ice wines.  I have a feeling that the warming climate might curtail that specialty.

This belief is not supported by provable facts. A regional drought cannot be linked to a questionable and unsettled theory called "climate change" What the hell is the definition of "extreme" weather?

Professor Principal
3.1  Buzz of the Orient  replied to  Greg Jones @3    one month ago

How about regional droughts happening all over the planet to an extent never recorded previously - rivers and lakes drying up?  Are you a meteorologist or a scientist?

In the Negev Desert, there are some experimental vineyards with support  from the Israeli and Italian governments, trying various techniques for grape growing in arid conditions.  .

One technique uses a trellising system to force vines to grow in a pattern, so that the leaves create a canopy casting shadow over growing clusters. They also are trying nets and covers of different densities and materials to limit heat exposure.

They have installed sensors that measure humidity levels in the soil and thermal cameras that track chlorophyll concentration in the vines. They also test various mulching or covering the vine roots with plastic to prevent evaporation while still allowing for drip irrigation.

Several winemakers Europe and California have visited the these vineyards in the Negev to learn the techniques.

where Thomas Jefferson visited the vineyards in 1787, before becoming president of the United States, and planted a pecan tree that still stands in a park.

Shocking that they let this slavers tree live and celebrate it in a park.

Junior Principal
4.1  Hallux  replied to  Drinker of the Wry @4    one month ago

Shocking that they let this slavers tree live and celebrate it in a park. 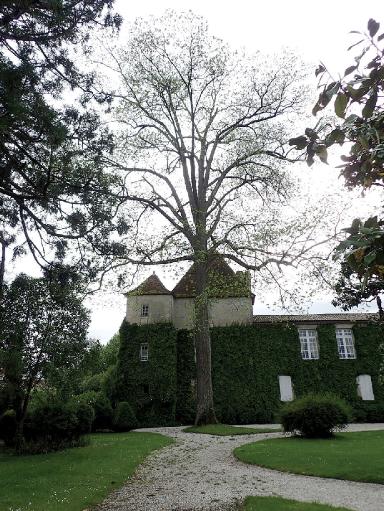 Thanks Hallux, I didn't know that pecan trees could thrive that far north.

Freshman Quiet
4.2  Waykwabu  replied to  Drinker of the Wry @4    one month ago

Professor Principal
5  Nerm_L    one month ago

Well, a play on the old saying -- when you're handed gripes make gripe juice?

A 10 pct decline in the grape harvest doesn't sound that extreme.  And it doesn't seem that wine production would be that high on the priority list.  It's beginning to look like a cold, dark winter for Europe.  Even climate change won't blunt the loss of natural gas.

Professor Principal
6  devangelical    one month ago

interesting. until now I thought most of the white whine came from republicans in the US.

interesting. until now I thought most of the white whine came from republicans in the US.

And now you know that most of it comes from anti-thumpers.

Freshman Principal
6.2  Drinker of the Wry  replied to  devangelical @6    one month ago

I thought most of the white whine came from republicans in the US.

Exactly, they are entrepreneurial.