Erdogan's Summit with Putin Should Ring Alarm Bells for NATO

Erdogan's Summit with Putin Should Ring Alarm Bells for NATO 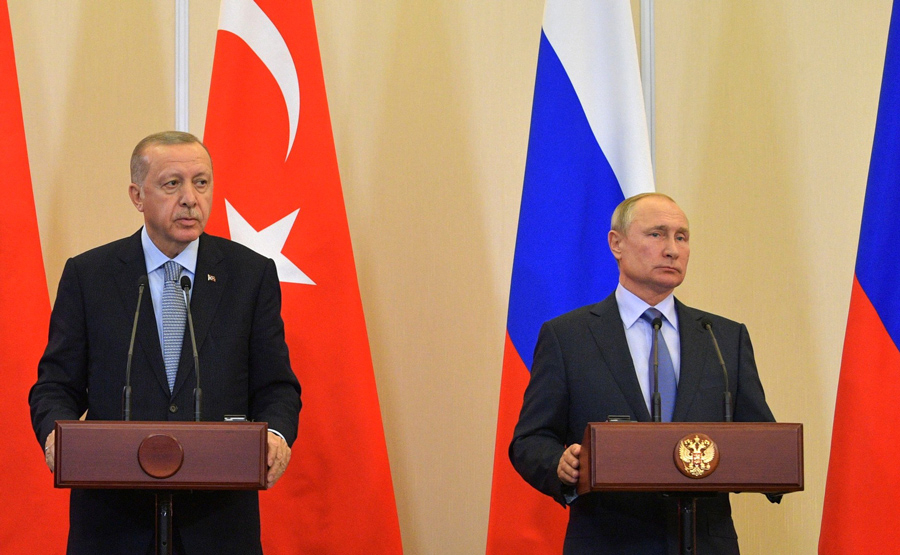 Turkish President Recep Tayyip Erdogan, to judge by his successful summit with Russian President Vladimir Putin on October 22 at the Black Sea city of Sochi, is proving to be Moscow's useful idiot in accomplishing Putin's goals of undermining the West and its allies. (Image source: kremlin.ru)

With Turkey seemingly intent on forging an ever-closer relationship with Russian President Vladimir Putin, the time has come to give serious consideration to Ankara's continued membership of the NATO alliance.

When the Turks first became members of NATO back in 1952, it was because their country was seen as a vital bulwark against the Soviet Union. Having Turkey in NATO meant it was easier to monitor the activities of the Soviet Black Sea fleet, and limited Moscow's ability to spread its tentacles into eastern Europe and the Middle East.

Now, thanks to the increasingly anti-Western conduct of Turkish President Recep Tayyip Erdogan, none of these considerations remains relevant.

These days, the Soviet Union might be no more, but Russia under Mr Putin's autocratic rule is just as determined to undermine the West and its allies, and Mr Erdogan, to judge by his successful   summit   with the Russian leader on October 22 at the Black Sea city of Sochi, is proving to be Moscow's useful idiot in accomplishing these goals.

Relations between Ankara and Moscow have improved considerably since Turkish warplanes shot down a Russian military jet that had strayed into Turkish air space in 2015.

Thanks to the close rapport that exists between Mr Putin and Mr Erdogan, Russia's Black Sea fleet is able to operate freely, to the extent that Russian warships based in the area were used to attack rebel forces in Syria fighting the regime of President Bashir al-Assad.

Now, following the success of the Sochi talks, the two countries have agreed to work together on the post-conflict carve-up of Syria, one that is designed to bolster the interests of both Russia and Turkey at the expense of the Syrian Kurds who were, until recently, regarded as vital allies of the US and other NATO member states in the fight against ISIS.

This means that Mr Erdogan can persist with his offensive against the Syrian Kurds, who commanded the pro-western Syrian Democratic Forces (SDF) in the battle to destroy ISIS, as he seeks to establish what he calls a "safe zone" in northern Syria which, to judge by the appalling casualties the Kurds are suffering at the hands of the Turkish military, is anything but safe.

Nor is Mr Erdogan's marriage of convenience with his Russian counterpart the first time that the Turkish leader has acted in a way that is directly contrary to NATO's interests.

Earlier in the summer, Mr Erdogan drew heavy criticism from Washington after he did an   arms deal with Moscow   that enabled Ankara to purchase Russia's S-400 anti-aircraft missile system, which was specifically designed to shoot down NATO warplanes. The Trump administration responded by saying it would exclude Turkey from the F-35 stealth fighter programme.

At a time when NATO is reconfiguring its resources to deal with the threat Russia poses to European security, from protecting the Baltic states from Russian aggression to dealing with cyber attacks, the cosy relationship that Mr Erdogan has embarked upon with Moscow can hardly be said to be in NATO's interests.

The time has come, therefore, for the alliance to give serious consideration about whether Ankara should be allowed to retain its NATO membership, or whether to abandon Turkey to pursue its pro-Russian stance.

A number of prominent Republicans, such as US Senator Lindsey Graham, have already called for Turkey's suspension from the alliance, and he has been the driving force behind attempts in Congress to impose sanctions against Ankara over its treatment of the Syrian Kurds.

Now the time has come for other NATO members states to weigh up whether it really is in their interests to allow the alliance's only Muslim state to retain its membership.

In the past it has been argued that ending Turkey's association with NATO would be a gift to Mr Putin, who would like to see nothing more than the NATO alliance collapse.

There is, though, a contrary argument to be made, namely that the alliance is already being weakened by allowing Turkey to retain its membership while at the same time pursuing policies which are directly opposed to NATO's interests.

Consequently, to my mind NATO would be far stronger, and better-equipped, to deal with its adversaries if it did not have to contend with a fifth columnist state like Turkey operating within its ranks.

Con Coughlin is the   Telegraph 's Defence and Foreign Affairs Editor and a Distinguished Senior Fellow at Gatestone Institute.

Trump is friends with Erdogan. Israel not so much...

Earlier in the summer, Mr Erdogan drew heavy criticism from Washington after he did an arms deal with Moscow that enabled Ankara to purchase Russia's S-400 anti-aircraft missile system, which was specifically designed to shoot down NATO warplanes. The Trump administration responded by saying it would exclude Turkey from the F-35 stealth fighter programme.

"Trump is friends with Erdogan."

Not as much as Obama was. 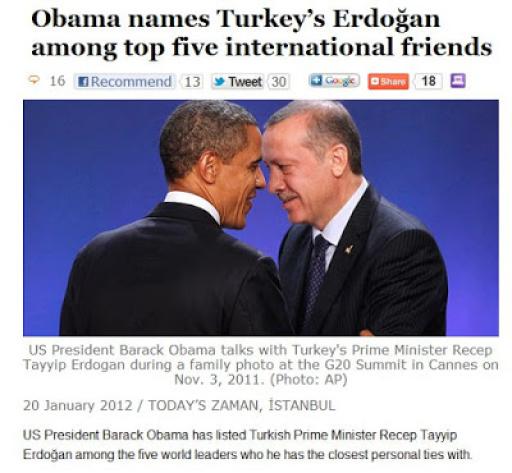 Gone are the days when the United States abstained on a key United Nations Security Council resolution denying the Jewish connection to Jerusalem. With the formidable Nikki Haley serving as U.S. ambassador to the U.N., the United States is no longer allowing this biased international body to castigate and unfairly single out Israel. President Trump made the bold decision to right an historic wrong and recognize Jerusalem as Israel’s capital.   Israel now knows that the United States truly has its back, both in word and in deed.

A controversial US plan for Israeli-Palestinian peace could spell the demise of Jordan and turn it into a “Palestinian state,” Jordanians and analysts warn.

The initiative launched by US President Donald Trump’s son-in-law Jared Kushner at a June conference in Bahrain dangles the prospect of $50 billion in investment into a stagnant Palestinian economy.

But it fails to address key issues and demands of the Palestinian side, such as the establishment of an independent Palestinian state, Israel’s occupation in the West Bank, and the Palestinians’ claim of a right to return to homes within Israel from which they fled or were expelled after Israel’s creation in 1948.

Jordan’s King Abdullah II has repeatedly ruled out a confederation with the Palestinians or giving up custodianship of Jerusalem holy sites, calling them “red lines.”

The White House said Tuesday that Prime Minister Benjamin Netanyahu’s vow to annex the Jordan Valley and West Bank settlements would not foreclose the possibility of a political solution to the Israeli-Palestinian conflict if enacted.

A source familiar with the administration’s thinking told The Times of Israel that the United States was “informed of this announcement before it was made.” Trump’s team, the source went on, said they “do not think it precludes the possibility of a political settlement in the future.”

Earlier on Tuesday, Netanyahu promised in a campaign pitch to immediately apply Israeli sovereignty over the Jordan Valley, almost a quarter of the West Bank, if he scraps together a new government after the election next week — in a move that is widely seen as an attempt to shore up his right-wing base.

The Israeli premier also repeated his pledge to annex all the West Bank settlements, but said this would only be done in a spirit of “maximal coordination” with the Trump administration.

Damn that Trump. What else can he give Israel to sooth their fears? TDDS at it's finest.

I interpreted jbb's comment as to mean that Erdogan wan't much of a friend with Israel.  I think that Trump has been one of the best POTUS friends Israel has ever had.

Never met the guy, but his Fez is familiar.

NATO might be waiting for the U.S.A. Final position before interjecting an "opinion" ?

Talk about a moving target.

Talk about a moving target.

Trumps being Reprimanded for doing just that !

I think the article concerns itself about Erdogan, Turkey, NATO and Russia, not about Trump, but I know Trump is indelibly prominent on the minds of all Americans.