By:   Henry Austin and Alexander Smith

"It might be U.S. army who brought the epidemic to Wuhan,” tweeted Zhao Lijian. “Be transparent! Make public your data! U.S. owe us an explanation!"

Chinese officials have sidestepped questions about whether Beijing blames Washington for the   coronavirus outbreak   after a foreign ministry spokesman suggested it could have been planted by the U.S. Army.

"When did patient zero begin in U.S.? How many people are infected? What are the names of the hospitals? It might be U.S. army who brought the epidemic to Wuhan,” Zhao Lijian tweeted in both Chinese and English on Thursday. “Be transparent! Make public your data! U.S. owe us an explanation!"

His post was accompanied by a video of Dr. Robert Redfield, director of the Centers for Disease Control and Prevention, saying that some Americans who had seemingly died from influenza later tested positive for the new coronavirus. 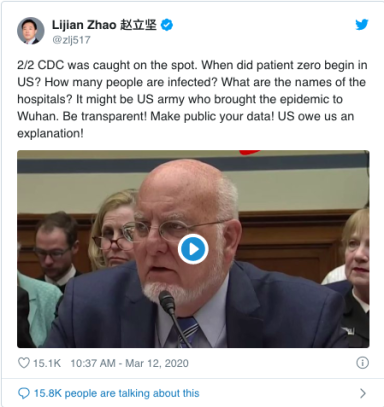 Zhao, who was based at the Chinese Embassy in Pakistan before moving to the foreign ministry in February, is a prolific social media user; a hashtag referring to his posts was trending on the Chinese social media platform Weibo on Friday with more than 89,000 mentions. He is known for being outspoken and for his sometimes outrageous comments.

His post came shortly after his boss and the ministry's top spokesperson Hua Chunying, retweeted the same video of Redfield, alongside a post which read: "It is absolutely WRONG and INAPPROPRIATE to call this the Chinese coronavirus."

When their colleague Geng Shuang was asked if their comments reflected Beijing’s official views on the virus — which is believed to have been transferred to humans at a market in the central Chinese city of Wuhan where the pathogen first broke out — he did not directly comment. Although Twitter is blocked in China, Chinese diplomats using the platform have appeared eager to float the idea that the virus did not necessarily start in their country at all, tweeting in English and aiming at a foreign audience.

Among them, Lin Songtian, China’s ambassador to South Africa, who also tweeted that the virus might not have originated in China.

Inside China, a raft of conspiracy stories have appeared online, including that the contagion might have been brought in by American athletes staying in Wuhan during the Military World Games last year.

Though these posts have been read by millions of people on Chinese social media sites, and been challenged by many of the same readers, that's not the most surprising thing about them,  Steve Tsang, a professor at the China Institute at the SOAS University of London, told NBC News last week .

He said it was interesting that the posts have not been removed by China's strict internet censors, who regularly scrub out any conversation or topic that they do not want to spread.

This suggests that these conspiracy theories — perhaps more through accident than design — chime neatly with the goals of the Chinese government to distract.

China is, of course, far from the only country whose social media users and officials are promoting unsubstantiated claims about the deadly outbreak.

Before he announced sweeping travel restrictions on 26 European countries and a raft of other measures to combat the spread of COVID-19, the disease caused by the coronavirus, President Donald Trump   called the virus a "hoax."

Sen. Tom Cotton, R-Ark., also promoted a fringe theory that the virus   was linked to a laboratory in Wuhan , something he has since walked back.

Meanwhile on social media sites such as Facebook, Twitter and YouTube, all of which are banned in China, conspiracy theories have racked up tens of millions of views and have been   among the most popular results   under certain search terms.

What a ridiculous accusation.  Just add that to all the other bullshit about this pandemic. Both sides are bound to blame each other - so typical.

Both sides are bound to blame each other

in all of recorded history, communists are known for telling the truth when?

They hid the professionals, too.

So why did the Chi-coms try to hide the existence of the virus when their medical professionals tried to warn their colleagues and public of its severity and spread?  Why do they censor the Internet?

because they are communists.. ya can't trust anything they say.

Maybe they knew Americans can't handle the truth.  LOL  (Thanks to Jack Nicholson in A Few Good Men).

Professor Principal
1.1.5  Buzz of the Orient  replied to    last year

1.  They admitted their mistake, and punished the police and officials who did it, even provided a solemn public apology for it.

2.   Because they didn't want the Chinese people to become "infected" by American values, like guns, partisan politics, loose morals, etc.

Come to China and get reeducated on way or another.

What a sales pitch.

Go ahead Buzz, use the F word:

But you know very well that freedom's just another word for nothing left to lose.

Seriously, freedom is just measured by degree - there is no such thing as absolute freedom or absolutely no freedom.  So Americans have more freedom than the Chinese do, and if I have all the freedom I need or even want in order to be happy and comfortable, why do I care if I'm living in China?   I'm not a radical, nor a firebrand nor do I have any desire whatsoever to be a hero.  You can be a hero and be able to criticize your own country and different other cultures and traditions all you want, so that and a dime (used to) get you a cup of coffee.  So, big deal.

But the real truth is there’s only one place to lay the blame and that’s at the feet of the CCP.

So, China has conspiracy theorists, too.  Why is that surprising?  Humans are humans.

Everyone else is blaming Trump.  That's been the de riguere response to anything happening around the world.  The global status quo has been built upon conspiracies of a misanthropic United States.  The Chinese government is only playing to the global norms maintained by an American press.

Maybe so, but he blocked it so nobody else in China can.

Does one dumb conspiracy theory deserve another?

Of course this is bullshit like righties are telling here.