Remote undersea volcano believed to be erupting in Pacific Ocean

A volcano is probably erupting deep beneath the Pacific Ocean in the U.S.

HONOLULU — A volcano is probably erupting deep beneath the Pacific Ocean in the U.S. Commonwealth of the Northern Mariana Islands, but scientists don't know for sure because it's so inaccessible.

All indications are that the Ahyi Seamount began erupting in mid-October, the U.S. Geological Survey said Monday. The Northern Marianas are about 3,800 miles west of Honolulu.

Scientists are looking to see if the activity is shallow earthquakes or if material exploded from the crater, said Matt Haney, a USGS research geophysicist. Scientists are checking satellite data to see if there's discolored water, which could suggest material is coming out of the volcano, he said.

"There's nothing right now that suggests that this eruption will intensify and become a large eruption," Haney said.

Still, mariners would want to avoid the immediate area, he said.

The Ahyi Seamount is one of a long string of submarine seamounts at the northern edge of the Northern Mariana Islands.NOAA

Activity from an undersea volcanic source was picked up last month by hydroacoustic sensors some 1,400 miles away at Wake Island.

With help from the the Laboratoire de Geophysique in Tahiti and data from seismic stations in Guam and Japan, scientists analyzed the signals to determine the source of the activity was probably Ahyi Seamount, the USGS said in a statement.

Activity has been declining in recent days, the statement said.

Ahyi seamount is a large conical submarine volcano. Its highest point is 259 feet below the surface of the ocean. It's located about 11 miles southeast of the island of Farallon de Pajaros, also known as Uracas.

"There are no local monitoring stations near Ahyi Seamount, which limits our ability to detect and characterize volcanic unrest there," the agency said. "We will continue to monitor available remote hydrophonic, seismic, and satellite data closely."

The seamount is part of the Mariana Volcanic Arc, which is a chain of more than 60 active volcanoes stretching over 600 miles west of and parallel to the Mariana Trench, the world's deepest point.

Having climbed the low fence and walked to the edge of the Mauna Loa volcano and looked down into the smoking cauldron, fiery red in the cracks below, sulfur smoke rising, having taught an English lesson about Yellowstone housing a super volcano, watching the movie "2012", taking note of the extreme climate occurrences, I do have a concern, the way things are happening, that Yellowstone is going to blow one of these days, and if it does, God help us.

Scientists speculate that Yellowstone has a good potential for becoming a super volcano eruption at some future time due to the huge magma chambers below the surface.

Can I claim any potential island(s)?

Will there be a plethora of poached Ahyi tuna?

The Mariana Volcanic Arc is within the Pacific Ring of Fire.

There is also ongoing volcanic activity creating a new island off the coast of the island of Hawaii, although it is attached to Mauna Loa, which is the tallest mountain in Hawaii.  It began forming about 400,000 years ago and is expected to emerge above sea level sometime within the next 10,000 - 100,000 years.

And, there was the major volcanic eruption in Tonga last year. 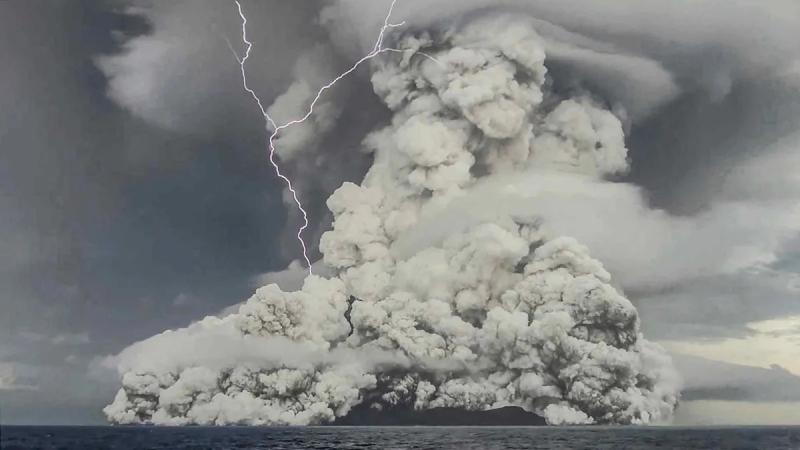