Marjorie Taylor Greene aims to be Trump's VP pick in 2024

Rep. Marjorie Taylor Greene, R-Ga., is angling to be Donald Trump's running mate in 2024, say two people who have spoken to her about her ambitions.

WASHINGTON — Rep. Marjorie Taylor Greene, R-Ga., is angling to be Donald Trump's running mate in 2024, according to two people who have spoken to the firebrand second-term congresswoman about her ambitions.

"This is no shrinking violet, she's ambitious — she's not shy about that, nor should she be," said Steve Bannon, the former top Trump aide who hosts the War Room podcast, where Greene has been a guest.

"She sees herself on the short list for Trump's VP. Paraphrasing Cokie Roberts, when MTG looks in the mirror she sees a potential president smiling back," he added, referencing Roberts, the late political reporter who worked for NPR, ABC News and other outlets.

A second source who has advised Greene said her "whole vision is to be vice president." The source, who has ties to Trump but spoke on the condition of anonymity to describe private conversations, said he also believes Greene would be on Trump's short list.

That goal is at the heart of Greene's recent efforts to rebrand herself as a politician who can stand astride the divide between the party's hard-liners and its establishment wing, the sources told NBC News.

It also helps explain why she threw herself into helping elect Rep. Kevin McCarthy, R-Calif., speaker of the House after the midterm elections and took assignments on two committees — Homeland Security and Oversight and Accountability — where she can participate in high-profile investigations of President Joe Biden's administration. McCarthy also tapped her to be part of the panel investigating how the government handled the COVID-19 pandemic.

Her push for McCarthy alienated some of her allies in the House Freedom Caucus and like-minded conservative activists, but that was a calculated risk, according to Bannon.

"She's both strategic and disciplined — she made a power move, knowing it would run up hard against her most ardent crew," he said. "She was prepared to take the intense heat/hatred short-term for the long-term goal of being a player."

Trump has not publicly given any indication that he is seriously considering a vice-presidential pick at this early point in the process, and aides did not respond to NBC News' inquiries about Greene's chances of ending up on a Trump ticket.

"Congresswoman Greene is laser focused on serving the people of Northwest Georgia on her new committees in the GOP majority," Greene spokesman Nick Dyer said. "Her work on Oversight, Homeland Security, and the COVID Select committee is her priority and people shouldn't get wrapped up into rumors."

Trump and his two-time running mate, former Vice President Mike Pence, had a falling out over Pence's pass at attempting to overturn their 2020 defeat, and Trump's refusal to immediately call off supporters who ransacked the Capitol, searched for Pence and chanted for him to be hanged on Jan. 6, 2021.

Trump, the only announced 2024 candidate for president in either party, has struggled to get his campaign off the ground since launching in November. He plans to travel Saturday to New Hampshire and South Carolina — two early primary states — and he remains the favorite to win the GOP nomination in national polling.

Over the course of two campaigns for Congress and a little more than two years in the House, Greene has become one of the chamber's most prodigious money-raisers, one of its highest-profile figures and a pariah to many of her colleagues.

In the 2022 midterm election cycle, Greene collected just short of $12.5 million, a total that placed her in the top 10 of all House candidates, according to the Center for Responsive Politics's Open Secrets tally.

Her penchant for bombastic rhetoric is at the root of both her superior fundraising skills and her alienation of fellow lawmakers. Trump voters have reveled in her ability to agitate the Washington establishment and progressives. But her tolerance for violent rhetoric about Rep. Nancy Pelosi, D-Calif., and her embrace of conspiracy theories — involving supposed Jewish space lasers starting a California wildfire and Muslim congresswomen not being legitimately sworn in — were too extreme for some lawmakers in both parties.

In February 2021, the House, then-controlled by Democrats, voted to remove Greene from legislative committees as punishment for "conduct she has exhibited" that fellow lawmakers found detrimental to the reputation of Congress. Eleven Republican moderates joined all of the Democrats in voting to strip her of seats on the Budget Committee and the Committee on Education and Labor.

McCarthy stood by Greene at the time, facilitating the development of a political alliance. With Republicans taking control of Congress this month, the McCarthy-led GOP Steering Committee placed Greene on two panels that will give her a platform to attack Biden, who is expected to seek re-election.

They may also give her an opportunity to repair relationships frayed by her support for McCarthy.

Jonathan Allen is a senior national politics reporter for NBC News, based in Washington.

"She sees herself on the short list for Trump's VP. Paraphrasing Cokie Roberts, when MTG looks in the mirror she sees a potential president smiling back,"

When trmp was elected I thought the US was emulating "Idiocracy". If she runs and is elected....we are Idiocracy.

I should have had more kids 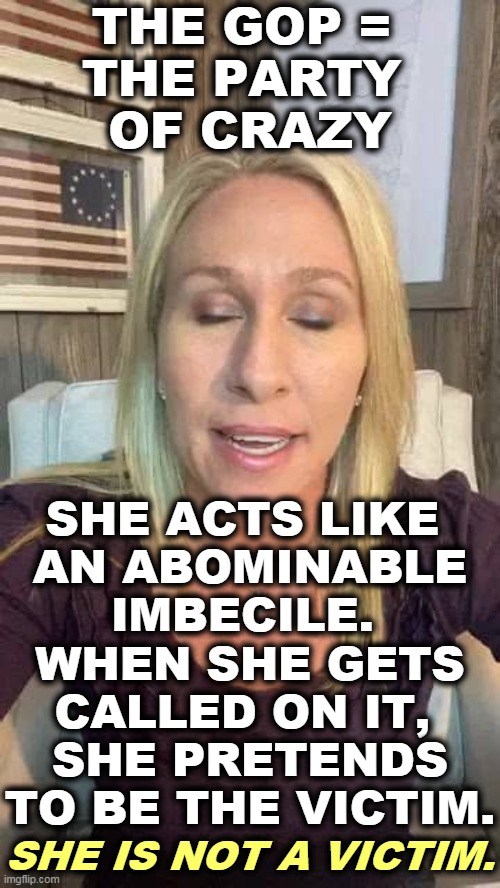 Professor Principal
4  devangelical    one week ago

considering what comes out of her mouth, nothing she puts into it would shock me.

Professor Principal
5  Ender    one week ago

I didn't know senators were only suppose to represent part of their state...

Greene is in The House of Representatives...

I am lost today. All the morons start to meld together.

Senior Expert
6  Gsquared    one week ago

As the Republican thought leader, Greene is the logical choice.  If Trump doesn't continue his campaign, given how extremist and insane the Republican Party has become, we can expect her to be their preferred presidential candidate.

Professor Principal
7  Kavika     one week ago

She will be in charge of the Space Frace and personally commanding the Jewish Space Laser.

Professor Principal
7.1  Trout Giggles  replied to  Kavika @7    one week ago

Do you think that's wise? I see her aiming it at Israel and trmp loves the Israelis...doesn't he?

Professor Principal
7.2  devangelical  replied to  Kavika @7    one week ago

hopefully she's looking down the barrel of that space laser the second time she pulls the trigger, after she doesn't hear a bang the first time...

Professor Expert
8  Buzz of the Orient    one week ago

GO FOR IT, MARJ!!!!  A Trump/MTG ticket would guarantee a Democrat win.

Junior Principal
9  Hallux    one week ago

Never in the annals of history has such a man deserved such a woman.

Sophomore Guide
10  Right Down the Center    one week ago

That would be great.  I hope Trump makes the announcement soon.  It will diminish his chance of being the Republican nominee.

DeDantis 24 (assuming the dems are going with mindless Joe)